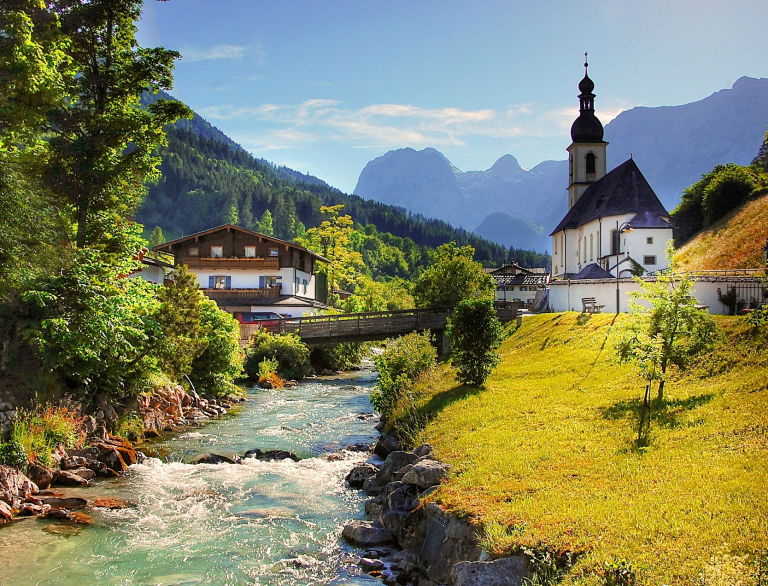 This project aims to build a cogeneration system for villages using biomass energy only, which help to transfer the villages from a dependent and poor energy situation, to an independent and sustainable raising area, both environmentally and financially beneficial.

When the lamps lighten countless dark nights, the city is being soaked into the warmth of luminous houses, and the huge amount of GHG. Undoubtedly, electricity keeps changing the world, but is it the time to amend the technology making the generation be friendlier not only to the human beings but to the environment as well?

This proposal will discuss the generation system development solutions in terms of a rural village. We will introduce the widely used generation system in section 1 and set it as the starting point for village 1.0; then based on this, we will discover more possibilities for the rural village to be electrically independent and sustainable. 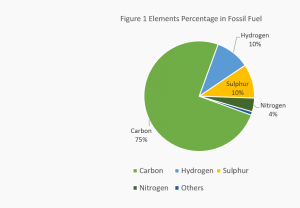 Large-scale generation of electricity has been playing an important role for the past decades, for which, the centralised power stations are normally located far away from the end-users and manage to reach your home plugs via a network of high-voltage transmission lines.

Indisputably, this centralised generation is one of the greatest inventions of the century. However, we can still find ways to make it better. In this project, we will put the emphasis on the generation system for rural villages, as they have their own advantages (easier to get biomass) and are in a more special and urgent situation calling for a change compared to the cities.

From the perspective of a rural village, when it comes to the conventional centralised generation system, there are mainly three disadvantages:

The Bio-Trigeneration Village project takes the issues to the heart and aims to solve the mentioned problems.

As mentioned above, most of the power stations are built centralised, which means the electricity need to be transmitted from the power station to the rural village via metal lines. This process will cause a huge electric waste.

How to reduce this waste? It is natural to come to the idea that we can short the transmission distance. In other words, instead of building centralised generation facilities which have the capacity to generate more than 1,000 gigawatts of electric power, we can focus on building small-scale or medium-scale systems which will only cover a village or the area nearby. This is called Distributed Generation System (DG).

If we manage to build such a generation facility just kilometres away from the village, the usage of electricity of this village will be completely independent from the bigger areas, thus the transmission lost will be massively reduced. We call this kind of village the Village 2.0. Based on the Village 1.0, which is covered by the electricity and does not need to live in the dark anymore, the Village 2.0 is self-governance and self-sufficiency in terms of generation.

By building a Village 2.0, it seems like that we have successfully cleared up the first two problems. However, is there still more spaces that we can find to further reduce the generation waste?

will be transferred to electricity, while the other 70% will be wasted. To solve this problem, we introduce the cogeneration system, which is also called Combined Heat and Power (CHP). 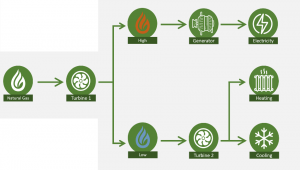 As a result, Table 1 illustrates the comparison between conventional generation and Co/Tri-Generation System. The Trigeneration system provides that approximately 80% of the energy can be used by the end-users, while the carbon dioxide emissions is lower by 68.8% and the loss caused by long-distance transmission is reduced by more than 50%.

Still, there is a problems for rural villages under trigeneration system. What if the village does not have enough natural gas or any fossil fuel to generate the electricity? This sounds fatal, as lacking of fossil fuel will take the village back to 1.0 level, or even worse. However, if we come to make full use of biomass, this will not be a problem anymore, and even more, the biomass can help the village become more environmentally friendly and sustainable.

We name the village “the fourth era village”, which refers to those using the Bio-Trigeneration System. The biggest different between village 3.0 and village 4.0 is that we use the biomass energy to replace the conventional fossil fuel.

We will now give a brief introduction of biomass here, and then come back to the Village 4.0 Model.

When it comes Biomass, the first thing we should make clear is that when we refer to biomass we mean renewable energy. Generally, biomass comes from local agriculture and forestry. The main essence of biomass fuel derives from the conversion of organic material into energy sources. It can be divided into three types:

Now it becomes clear that why our project focuses on the rural villages. Because compared to urban areas, the villages have obvious advantages to generate and collect these three types of biomass. Replacing the natural gas in Fig. 2, we can get the process of Bio-Trigeneration System as Fig. 3 shows. 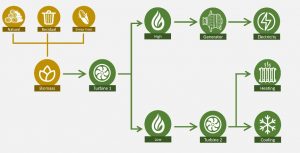 Based on the idea of Bio-Trigeneration System, now we try to think deeply how to make a cycling within this village to make it more sustainable and practical for daily life.

Here in this project, we use a sugar cane farm as an example. We suppose there is a Village T which mainly lives on producing and selling sugarcanes. As Fig. 4 shows, there is an energy cycling insides the Village T.

Those parts of sugarcanes which cannot be sold, can be used as energy crops; and at the same time, there is also residual waste from the residents. Thus, we can collect both of the sugarcane and residuals together and put them into the turbine to generate electricity, heating and cooling under the Trigeneration System. The electricity, heating and cooling produced by biomass can then go back to the residents and sugarcane field for future using.

Furthermore, there will also be an electrical warehouse for Village T to store the surplus electricity generated by each resident.

Besides, this system also builds a finance cycling (Fig. 5). There are three parts: investing, earning, and saving. The farmers invest money to grow sugarcanes; as a return, selling sugarcanes can make incomes; at the same time, the trigeneration system helps the farmers to be self-powered, which means they save the money that was used to buy electricity before. 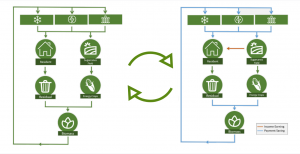 We understand the vital importance of environmentally friendly energy. Therefore, we constantly looking for innovation which works best for making villages sustainable. Rural areas are left behind the race of development and often lack energy infrastructure to connect to a centralised system especially in developing countries. InSell targets to connect to technology providers from Germany and innovate solutions reengaging from distributed system to tri-generation village to achieve its goal for sustainability. The concept provided here are to be tailored to the individual needs of the countries while looking at the develop stage of the villages. We are looking for technology partners to innovate solutions and rural communities who are open to implement the concepts.

Is Cradle to Cradle Design a utopia idea?

Less is more is it still practical?

Aerial vehicle as a tool to ensure sustainability

Scale of Economies with affordable housing