Bioenergy, a renewable and sustainable source of energy coming especially from local Biomass that can be implemented in rural areas by bringing several benefits on their societies, economies, in the environment and for them to become more independent.

Not taking into account lignite and renewable energy sources, it can be argued, that Germany highly depends on imports of energy resources. The import quota on coal, natural gas, and uranium ranges from 80 to 100%. And this dependence of economically fragile regions is a risk for the local economy and for an internal relationship. In villages, this situation in highly reflected. They are dependent on those sources and so are their economy. However, bioenergy can be a solution to that challenge.

Briefly, bioenergy is described as a renewable and sustainable source that simultaneously, guarantees a certain level of freedom and strengthens for both social interactions and business relationships, improves environmental situation allowing zero-waste villages and assists in saving local budget.

What might be helpful is a smart approach called Distributed Generation. The background of this approach is an idea of powering both urban and rural areas locally by using their own sources of energy. The concept of Distributed generation is based on using Distributed Energy Resources (DER). Possibility to adjust their size, location and productivity in order to meet specific needs of the population without over-expenditure, make this concept a component part of sustainability from a financial and an ecological perspective. Particularly, in this post we will talk about a specific manifestation of Distributed Generation called Bioenergy Villages that ensures independence and self-sufficiency for territorial units.

For a broader view, in figure 1 is possible to see all the branches from DER. 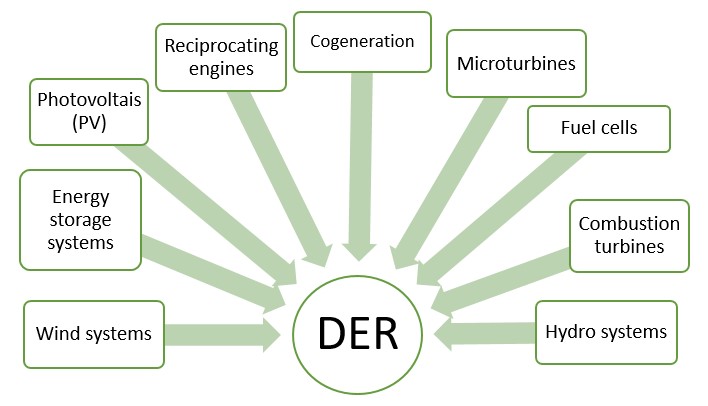 Target Groups
For its part, the approach of Decentralized Distributed Generation for the rural area has manifested in the concept of Bioenergy Villages. In this scenario, there are a few groups that can be targeted and influenced by this practice as shown below.

Furthermore, the type of applied bioenergy technologies may vary considerably accordingly to the potential of a region itself such as:

The main component for generation of energy in those villages and that bring simultaneous benefits to all areas and groups is the Biomass, one of the most important fuels in the world. It is based on conversion from organic material into energy sources. There are types of biomass sources as its possible to see in figure 2. 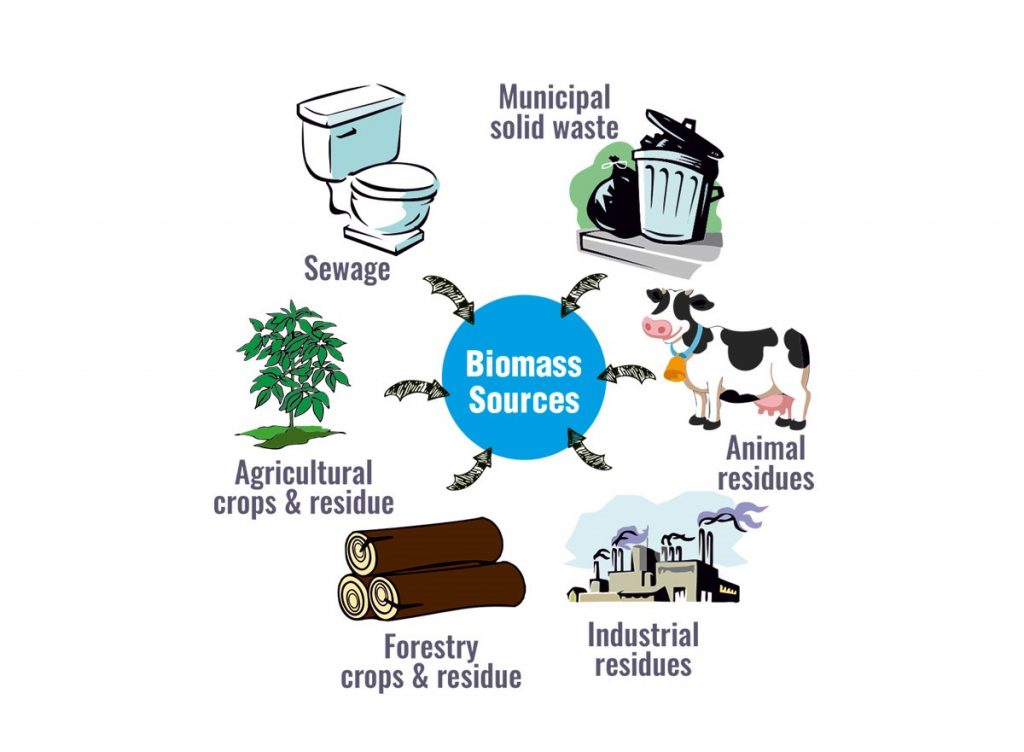 Additionally, a brief and simple explanation of the working principle of producing energy using the example of a residual type of biomass as a resource is highlighted in Flow 1.

Benefits
We can see undeniable advantages from the use of biofuels that affect many spheres of the society and create a sustainable foundation for living such as the ones listed below.

Challenges
At the same time, challenges can be found in order to make villages sustainable and implement initiatives.

The Implementation
According to a list posted by Bioenergy Villages FNR (Fachagentur Nachwachsende Rohstoffe), currently there are 139 bioenergy villages in Germany and 48 units are on the way of implementation. 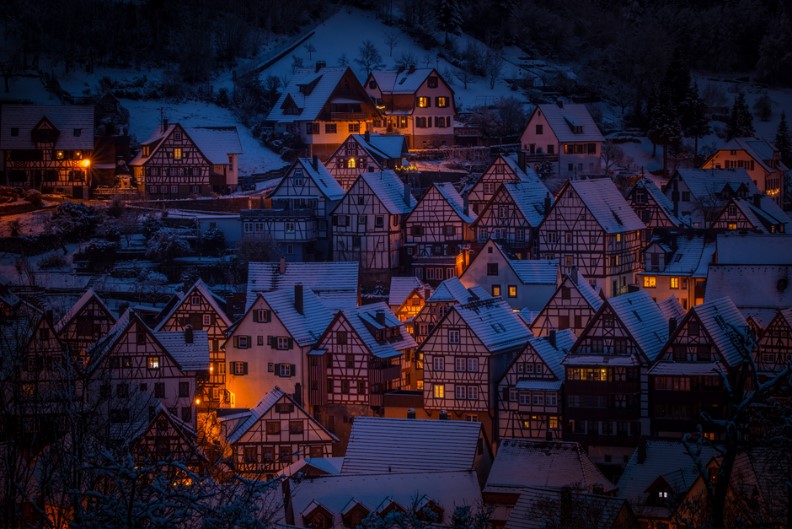 World Widing speaking, by the year 2020, the amount of heat supply and renewable energy used is planned to increase. The International Energy Agency (IEA) has its partners in 29 countries around the world. In 2005 the Federal Republic of Germany joined the IEA, has signed an agreement with the organization. Within the IEA, Germany is currently engaged in 11 ongoing tasks regarding bioenergy and biomass, including inter-task and special projects. On table 1 is presented a few of the most successful practices of implementation of bioenergy strategies in Germany in accordance with a project “Bioenergy Villages (BioVill) – Increasing the Market Uptake of Sustainable Bioenergy”. 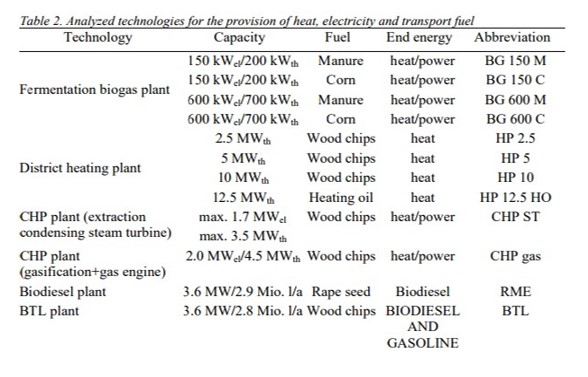 Table 1: Analyzed technologies for the provision of heat, electricity and transport fuel.

Most successful practices of implementation of bioenergy strategies in Germany from the project: “Bioenergy Villages (BioVill) – Increasing the Market Uptake of Sustainable Bioenergy”.

Within the land of Baden-Wurttemberg region, there are only 39 examples of this strategy, but the project “Good Bioenergy Villages in Baden-Württemberg” was created aiming to hit energy efficient practices.

As a further example, the city of Växjö in Sweden has presented a model of sustainability and aimed to make a city fossil-fuel-free by 2030. The process has started in the 90s and decisions are making regarding the following sectors:

Apart from the representatives in Europe, a similar concept called “Smart Villages” was developed in India, Harisal. Rural population in India is estimated on average at approximately 70%. Because of the poor road connectivity, there is sometimes no immediate connection with an urban area. Moreover, energy demands may not always be met in a proper way. This situation has a negative impact on health, educational and civic facilities. At the same time, it is easier to adjust a city to the innovations and implement new technologies there, however, there are fewer opportunities for it in villages. For advancing the first smart village in India, the government along with Microsoft have developed digital solutions for persistent rural problems. As a result, the positive development has taken place such as Wi-Fi connection, the decrease of the number of school dropouts, better health-care systems, eco-improvements, and changes in other spheres and all those impacts were experienced by the villagers.
InSell´s Role
According to forecasts, by 2040 the share of renewable energy will reach 47,7%, while the contribution of the biomass of 23.8%.  With this concept being implemented further developments on the bioenergy sector are able to provide solutions for waste management, opportunities for the social and economic advancement of rural areas, increase energetic security, trade balance and to reduce greenhouse effect along with other environmental profits.

In this context, InSell together with its partners provides consulting and technology services in order for villages that are open to this idea, to establish themselves as Bioenergy villages and for the expenses for energy to remain in the region. Furthermore, in the next blog post, it will specifically be explained about the ways of implementing this biovillage concept and the innovative `Bio-Trigeneration Village Project`.